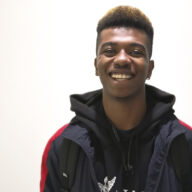 Kai chose to study performing arts at City of Oxford College after believing that college would open more doors for him in his chosen field. Here’s what he had to say about his programme:

“At school, I was hearing about all my options: college, sixth form, apprenticeships…although I came here and did the level 3 audition, my main priority was still going to sixth form.

Then, I realised that it would probably be better for me to go to college as I felt like I would be able to get more of a range of the things that I wanted to do; I wouldn’t be tied down to other things and I could just concentrate on straight acting.

I’m a practical learner, so I felt that if I went to sixth form, I would be doing a lot of written work; I’d be doing shows, but not big shows, just shows at the school. I knew that I could do more shows and less written work at Activate Learning. It is kind of 50/50 at college between written work and performing, whereas at sixth form it’s more 70/30 [performing/written work].

I wasn’t really worried about the change in atmosphere from school. I never went to sixth form; I went to college straight after school and did a level 2 qualification, so I was able to build friendships with people and trust with the tutors. It was so much easier to enter on the level 3 after that as I knew how the college worked; I knew people’s mind-sets and how they liked to work, I knew how my mind-set should be when I stepped into that theatre are what was being asked of me.

I didn’t really know that there were any other colleges. I just knew that this was where my friends came, but when I entered college, that’s when I realised there were so many other campuses.

The main thing that stands out to me on the course is the shows. They are the highlight. Obviously, we have different units throughout the course, but it’s been really effective the way they’ve built up to [the shows]. From the first practical exercises, where everyone is new and no one really knows each other so we just do a bunch of games just to know each other, then we do mini shows where we work together and get to know each other better. It’s really effective because in order to succeed you need to learn how to work with a team. Especially with drama. You need teamwork to succeed and prevail.

My success in college is really just about growing as an actor. When I was on the level 2, I felt like I wasn’t really good as an actor, but when I got to level 3, I realised that I had improved. Then the musical came, “In the Heights” and then I got one of the main parts, Benny. My confidence in my acting ability really increased. I can honestly now say, ‘yeah, I can act.’

Then, I went for an audition for West Side Story at the Birmingham Hippodrome and I got it. I’m in the ensemble cast and I’m really happy because it’s proof that my hard work has paid off and I’m now in the Hippodrome. I’m really thankful to my tutors Ruth and Claire as they really built my confidence to go out there and take auditions, sing a song or dance and do what is asked of me.

I’ve never been academically smart; I’ve never been the top of my class. At school, it was kind of grilled into me that if you don’t succeed there, then you’ll never be successful. I had that told to me multiple times, but then I got to college and it was totally different. Everything that the teachers told me in school wasn’t true. Because at college I can put all my hard work into one thing that I really want to do, I have more drive to succeed and I can put all my energy into the things that interest me.

In the second year of my Level 3, I want to focus more on getting into a university in London and doing way more auditions. I want to move back to London and study drama at one of the big unis, but I’ll be happy with any uni that’s London based. I want to be able to get to any auditions easily.”