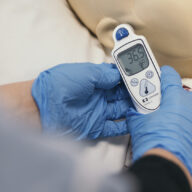 Xhuada is no stranger to hard work, having started school in England in her teens despite not speaking English fluently. Despite this obstacle, she studied hard to get where she is now, about to finish the second year of her Health and Social Care Level 3 Diploma. She is now employed by the NHS as a nursing assistant after impressing her work colleagues with her dedication and drive during a work placement on her course, as well as having obtained valuable qualifications and experience.

Like many of her peers, when Xhuada started college, she wasn’t completely sure on what career path she wanted to take, she just knew what she liked doing, and that was caring for others, so she chose her course based on that with the idea to just see where it took her.

Here is her story, in her own words:

“I wasn’t really interested in going to a sixth form. When I first came to England, I couldn’t speak English at all. The school that I went to said they would help me with my language skills, but they didn’t really help me at all. To improve my English, I started coming to the college. My teacher’s name was Sharon, and she was so helpful. She really helped me learn and that made a great impression on me.

“Then, when I was thinking about what to do after school, people that I spoke to recommended Banbury and Bicester College. I’d already had a good experience there, so I thought I’d check them out.

“To be honest, at first, I wanted to do the sports and science course there, but on my way to the college, I suddenly changed my mind! I realised that I’d be better suited to caring for others. I’m a chatty person and I love taking care of people, so I thought this would be better than studying science and sports.

“When I first started my Level 1 course, I was still wondering whether I should do this course or not. My teacher on that course, Ruth, she helped me a lot with everything and was always talking to me about my options with the course. The support teacher, Jamie, helped me a lot and was really supportive, so I was like, ‘great! I’m gonna keep doing this!’ It made the course really enjoyable.

“When I was in year one, I was still learning English and getting used to the change from school, so I didn’t really use the facilities at college much. I lived near the campus too, so I would go home for lunch, but when I joined the Level 3, I started using the canteen more, going to the library, and shop. We used to watch the arts’ students’ performances as well as that was always interesting to see. In the final year, we went to a laboratory and did a discovery session on the heart of an animal! It was a good experience for us as we got a good idea about how the heart works.”

In June of 2019, after hearing a talk at Banbury and Bicester college from a member of staff from Banbury hospital, Xhuada decided that a placement at an NHS hospital would be a valuable experience for her and so she applied. She heard that she was successful in her application in August and began her placement in October of the same year.

“As I’d already done a work experience in a care home and another in a nursery, I thought, ‘Why not try a hospital?’” It was a decision that Xhuada certainly doesn’t regret!

“I started in an outpatient ward in Banbury and after that, I’ve been doing everything really that the trust needs me to do. I’ve been doing manual handling, induction days, getting my care certification, which helped me a lot on my job interviews as well, I was basically just preparing to be able to work with the trust.

“My aim was to start working where I was doing my work experience, but they were not hiring at that moment, so I applied to the trauma ward in Banbury hospital. I had been trying to get an interview or anything there for a while, even before being part of this work experience at the hospital. Because I was so young, though, and I did not have that much experience, my application was rejected.

“But, with my work experience and care certificate and everything, they called me in for an interview and I got accepted! It was such a great day for me. Everything that I was trying to do on that work experience counted for something. I was working so hard and even when studying at the college, I was trying to study even more so I could get to where I wanted to be, and I made it!

“I am starting as a nursing assistant now. I’m not a university girl; I don’t want to move away from my family and friends and just study academically, I’ll be applying to Oxford Brookes university for Nursing Association training.  It’s a two-year course and it gets you in a higher pay band. In this way, I’ll help myself get higher and see more of what I want to do; get different experiences.

The course is like an apprenticeship; you are working full time and the rest of the days you are just doing your training at the hospital, but you get paid for it. It’s a very new course.

My aims are to be a midwife, and hopefully through that course I will be able to become one.

“I would suggest to everyone that you don’t take being part of the hospital as a joke; you have to work hard when you’re there. They will respect you if you put in the effort and, if you have a question, they will help you even more. They’ll push you to do your best and while you’re there, you’ll do things that will make you realise if you want to be on the job or not. I love it at the hospital, and I’ve noticed that it doesn’t really matter which department you are in, the people there are so lovely!”