1318- First mention of Merrist Wood in historical documents. Spelling varied but the Old English meaning is “wood hill by the pool or boundary”. Farmstead probably dates back to pre-Domesday, as home to one of five smallholders living in Worplesdon then.

1582 - Queen Elizabeth I grants lease of Merest Woode to George More of Loseley. It forms 82 acres of wood and grounds in the bounds of Windsor Forest.

1762 - Marked on first of Rocque’s Maps of Surrey miss-spelt as ‘Merystwood’.

1939 - Merrist Wood Estate purchased by Surrey County Council under Compulsory Purchase Order with intention to convert Merrist Wood House into a mental health institution. Residents object strongly in newspapers and at public meetings: “’Tis sad to think that Merrist Wood…Should be a home for mental cases”!

Plans for conversion shelved in onset of Second World War. Site becomes an evacuation centre for Senior County Council Officers. Hall used as a residence and staff work at Guildford Technical College and large houses in the area.

1943 - Government committee recommends that every county should have its own Farm Institute to train people for careers on the land. Merrist Wood selected as Surrey’s.

1945 - Courses begin in agriculture and horticulture. First students are all residential. Rules include curfew of 9.30pm, lights out by 10pm, breakfast at 8am (after milking duties), no guests, no firearms (this still applies!) and formal dress for evening meals.

1968 - Merrist Wood becomes the venue for annual conferences of the Arboriculture Association which supports the launch of the Ten Week Tree Surgery course and full-time courses.

1972 - Arboriculture students helped clear 200 trees on the Merrist Wood estate which had been killed by Dutch elm disease.

1978 - Fire starts in the common room and rages through the house. Sixty firemen fight the blaze, students and staff escape to safety, one climbing down a drainpipe. Damage severe but stacks and walls remain sound and rebuilding begins according to original designs.

1980s - Farming courses phased out due to demographic changes in Surrey shifting land use away from agriculture.

2000 - New equine unit opens. It includes the largest indoor arena in the country, three outdoor schools and stabling for up to 70 horses.

2004 - Champion racing driver Damon Hill and then MP Sue Doughty are guests of honour at the College's first joint Graduation and Awards Ceremony for both campuses.

2005 - HRH the Countess of Wessex visits Merrist Wood Campus to see the Journey of the Senses Garden entry for Hampton Court Flower Show. The garden goes on to win bronze medal at the Show, alongside two other Merrist Wood gardens, one of which won top show garden overall.

The merged College has a successful OfSTED Inspection. The Report highlights the strong strategic leadership from the College’s senior management team and the high regard in which its students hold the College.

2006 - Staff and students associated with Merrist Wood celebrate three medal wins at the Chelsea Flower Show and a Gold medal and Best in Show at the 2006 Hampton Court Palace Flower Show.

2007 - The College was the first in Surrey to achieve Action for Business College Accreditation. 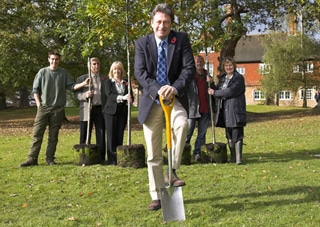 2009 - The College's Ofsted Report grades the College as "good" overall, with land-based learning at Merrist Wood assessed as "outstanding".

2010 - The College joins a select group of 3,000 organisations to celebrate 10 years of Investors in People.

2012 - The College successfully secures a bid for £1.5 million pounds from the Skills Funding Agency, to develop new facilities which benefit 3,000 students per year.

2013 - The College's staff and students were successful in breeding rare red squirrels in a coup for a national conservation campaign to save the species.

Equine students rode to victory at a national inter-college competition, beating 13 teams from all over England to take first place.

2014 - Students and staff were commended by the Chief Constable of Surrey Police for their work in building the Mount Browne Memorial Garden.

Merrist Wood College’s residential provision was graded as “outstanding” by Ofsted in all five inspection areas: Overall Effectiveness of the Provision, Outcomes for Young People, Quality of Service, Leadership and Management and Safeguarding.

2016 - The College’s new Animal Management Centre is officially opened by Naturalist and TV Presenter Nick Baker. The building includes a desert biome, a tropical biome and a nocturnal zone housing a wide variety of species to enable them to be studied and cared for in a more natural environment.

Former Landscaping apprentice wins Gold for the College at the 2016 EuroSkills finals in Gothenburg, Sweden, and previous Floristry student also won Silver at the finals. The competition welcomed 500 competitors from 28 nations across the Europe.

2017 - Mayor of Guildford, Councillor Gordon Jackson, officially opened the College’s new Supported Learning centre - The Woodlands Centre. The new centre provides a safe and secure learning environment for up to 64 students with severe and complex learning, social and communication difficulties.

The National Centre for Diversity (NCFD) recently announced that the Guildford College Group has not only achieved the Investors in Diversity Standard at Stage 2, but also features at number 22 in the UK Further Education Top 50 Organisations and at number 57 in the Top 100 Index.

Landscaping student achieves a 'Medallion of Excellence' at the 2017 WorldSkills Final in Abu Dhabi.

One of the UK's best known wildlife presenters and adventurers, Steve Backshall, joined graduates and award winners of all ages to help celebrate their outstanding achievements at the 2017 Guildford College Group Graduation and Awards Ceremony. 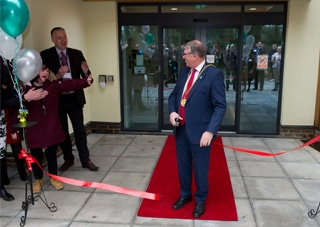 Learn more about us

Learn more about us

Please note that we are finishing half an hour earlier due to roadworks.